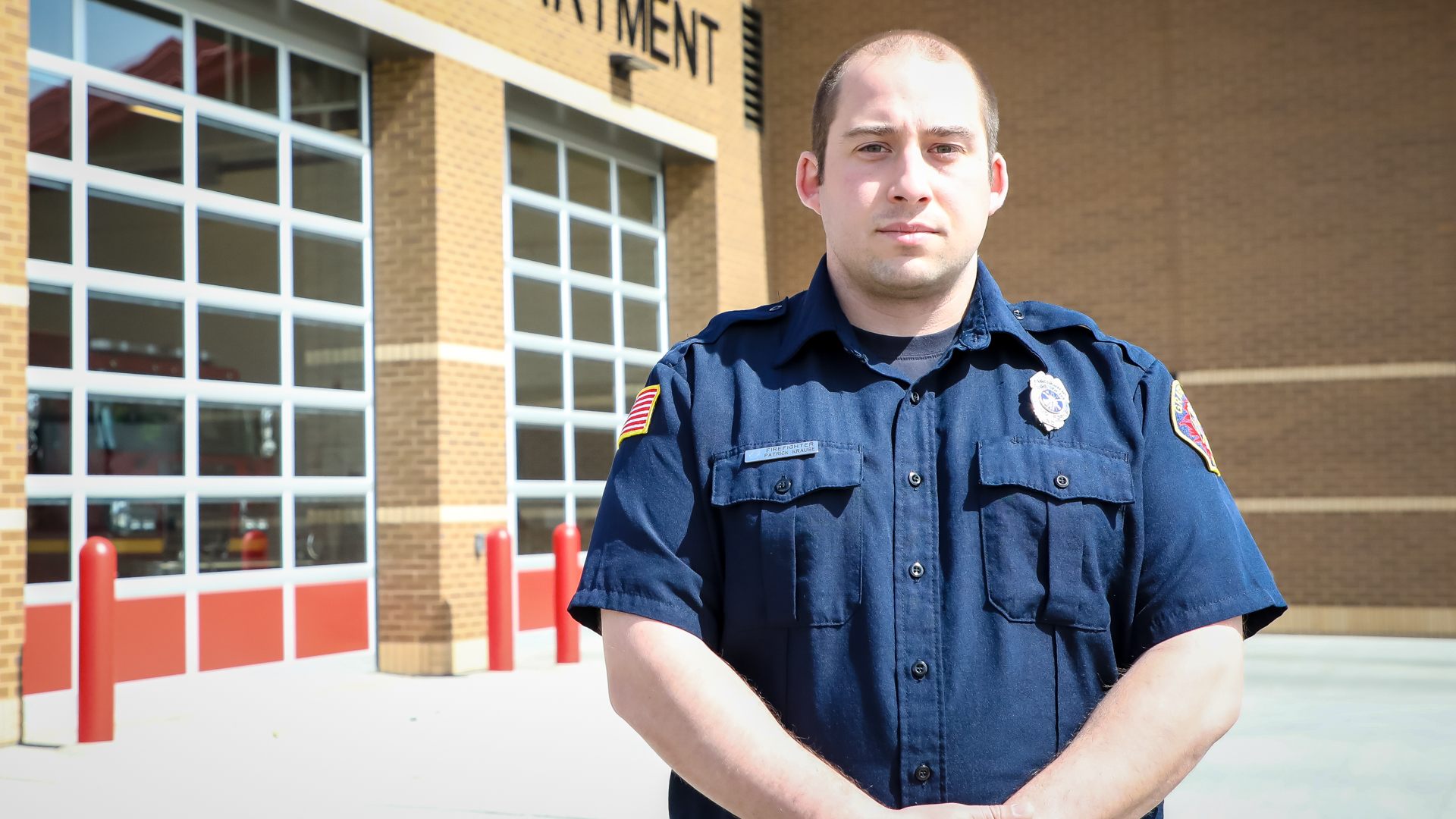 Wanted: Lifesavers with a Thirst for Adrenaline

Pat Krause found himself dealing blackjack in Grand Forks after graduating from a four-year university with a degree in psychology. He found himself in a similar situation as many new graduates after leaving a four-year institution. With a more general brand of bachelor’s degree, he was asking himself a common question: What do I really want to do with my future? Blackjack certainly wasn’t a career. It paid the bills, but there was no inspiration, no motivation, no fulfillment. He needed a change.

Today, sitting down with Krause at the newly-opened station #5 of the Grand Forks Fire Department where he works as a firefighter paramedic, it’s clear he’d finally found his calling. Far from a “comfort zone career,” Krause was drawn to the job for its tangible impact on his community. He also found inspiration and direction at Northland Community and Technical College, where he would return to learn the skills he’d need in this lifesaving field.

“I heard by word of mouth that Northland had a really good paramedic program, as well as a specific firefighter paramedic program, which led me to this field,” Krause explained. “I was looking to apply for firefighting positions, and my advisors recommended the paramedic route because it would open up a lot more opportunities.”

Initially, firefighting was Krause’s goal, but the more he looked into the career, the more he learned about the day-to-day realities of the job. He discovered that most of the calls coming into the fire department are for medical emergencies. That’s when the lightbulb went off in his head.

“With the fire department in general, most calls are medic calls,” Krause said. “So, having paramedic training makes me much more versatile as more departments are now requiring paramedics as the standard for new hires. Northland offered me both with their firefighter paramedic program.”

On day one of his new job, Krause gained an even deeper appreciation for the training he received at Northland. As part of a new batch of hires for the Grand Forks Fire Department, Krause and his rookie firefighters were enrolled in a first-of-its-kind program that was part training, part orientation to the career.

With the two-year degree, you get a lot of skills-based and classroom-based training that gives you a leg up once you’re on the job.

“We started the first fire academy held by the Grand Forks Fire Department,” Krause explained. “We did 12 weeks of training, which covered the basic skills to become an entry-level firefighter. Going through that academy, I noticed we covered most of the skills and training at Northland already, so I had a good foundation in the skills we were expected to learn on the job as new hires. With the two-year degree, you get a lot of skills-based and classroom-based training that gives you a leg up once you’re on the job.”

Now, just about a year and a half on the job with Grand Forks Fire Department, Krause is still learning the true complexity of the position. “I didn’t realize the variety of things you do as a firefighter,” he said. “It’s not all about putting out flames. We do everything from car accidents to trench rescues to medic calls. You never know what the day’s going to bring.”

A Life of Service … And Yes, Adrenaline

The lifesaving nature of the job cannot be overstated. Paramedics—whether they work at a fire department, on an ambulance in a national park or elsewhere—are on the front lines of emergency medical care. Every call that comes brings the opportunity to save a person’s life. It’s a career in service to others, but it’s also a career custom fit for those who find the best in themselves when called into action.

“It’s an exciting career,” said Dan Sponsler, a 30-year veteran paramedic. Sponsler has been Northland’s lead instructor since 1992 when the paramedic program grew from a certificate program into a two-year, A.A.S. degree. As he discusses his chosen career, his tone is enthusiastic, yet guarded. You can hear in his voice the depth of his experience and the impact it has had on his life.

Some people call us adrenaline junkies. You have a direct impact on how well patients survive their situation.

“It’s not a 9 to 5 job,” he said. “Working with people, working the streets, it’s not a career that everybody can do. Paramedics are people who can deal with stress, think critically, and make decisions on their feet that impact people’s lives. It’s not for the faint of heart. We get involved in situations that are emotionally and physically challenging, and we need to be able to deal with those.”

“It’s different every time you go out on a call,” he continues. “Some people call us adrenaline junkies. You have a direct impact on how well patients survive their situation or how well they come out of it.”

Art Culver, manager of Altru Health System’s ambulance services, echoes much the same message. He’s a Northland graduate with 20 years of experience on the job.

“There is an adrenaline rush when we go on 911 calls,” he said. “What gets us going is coming to work and helping people. That’s really why we do this job and not everybody can do it. We see simple things and we see horrific things, so it takes a special type of person to be able to do this job. We do it because—in the end—even if it’s a bad outcome, we gave that person every possible chance.”

Training for a Lifesaving Career

To be in the position to give someone else a chance to live, to be able to care for people at their worst, the realities of working in crisis, it all starts with training for the moment. For Culver, whose job is now to recruit and staff a team of 40-plus paramedics at Altru, there’s no better place to get that training than Northland Community and Technical College.

I only hire quality paramedics, and nine out of 10 of ours come from Northland.

“I would say out of the 42 paramedics that we have here at Altru…” Culver pauses a moment as he tries to count, “…only four did not go through that program. Ninety percent of our paramedics went through Northland’s program, so it is vital to us,” he said. “There are people from around this area who want to become paramedics and want to stay here and give back to their communities.”

And that’s the essence of what it is to be a community college, and it’s the reason why students choose Northland. They want a career with purpose. They want to stay close to home. They want to contribute to their hometowns, and Northland provides the perfect environment—combined with educational excellence—that goes unmatched throughout the upper Midwest. Just ask Culver.

“I don’t hire just to fill a position,” he said bluntly. “I only hire quality paramedics, and nine out of 10 of ours come from Northland, so I would say that the quality of their instruction is really great. It’s great that the majority of their students do their internship with us, essentially being interviewed six to eight weeks while they’re working with us during their internship.”

Like many of Northland’s other two-year programs, the Paramedic A.A.S. program was the first accredited paramedic training program in the entire region. Sponsler said the school recently completed its fifth round of re-accreditation, a testament to the dedication of Northland and the program faculty who continue to provide this critical life-saving training needed throughout the country.

“Our two-year program, if you put it in clock hours, is about 2,000 curriculum hours of training,” Sponsler explained. “A little over half of that is hands-on training, teaching skills and integrating the classroom knowledge with field skills. We combine that with clinical in hospitals and in ambulances doing actual patient care under supervision as well as internship time, where students work the streets with experienced paramedics getting the first-hand experience.

There’s such a demand that graduates today are leaving here with limitless opportunities in the field.

When it comes to job placement, Sponsler doesn’t hesitate.

“We have 100 percent job placement for our Northland graduates,” he said proudly. “We have a lot of companies come to recruit specifically at Northland because of our reputation. It’s not uncommon for our students to come out of their internship with a job offer.”

“There’s such a demand right now and will be for the foreseeable future,” he continued. “Our graduates can go to work pretty much anywhere they want when they get out of school—rural areas, metro and everywhere in between. If Altru could find five paramedics right now, they’d hire all five. The Fargo-Moorhead area is in a similar situation. It’s a nationwide shortage. There’s such a demand that graduates today are leaving here with limitless opportunities in the field.”