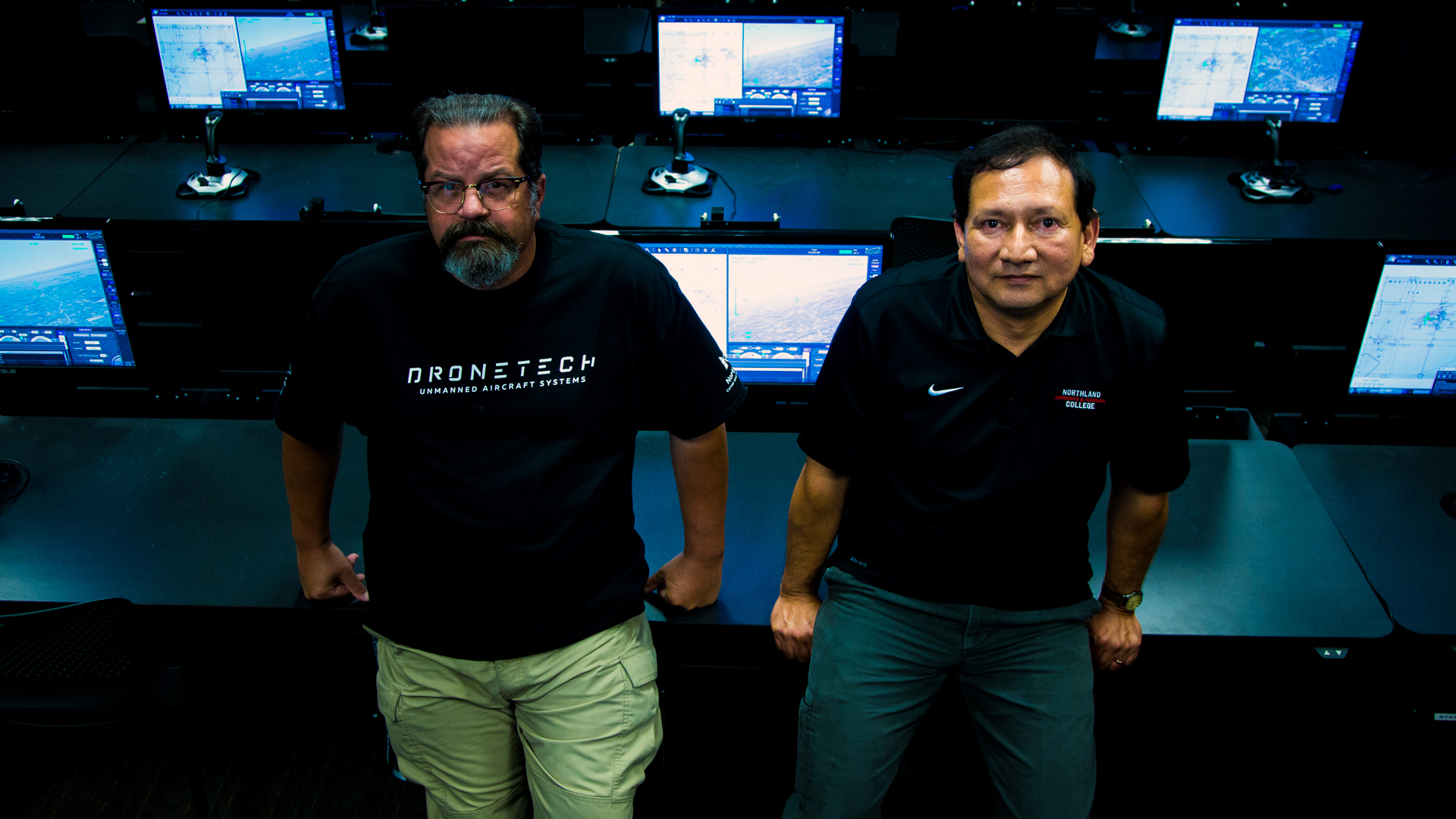 Farming is a way of life that’s both steady and unpredictable. Most days, farmers rise with the sun and work until it sets—a steady pattern put on repeat, year after year. Until harvest time comes, however, there’s always that lingering feeling of uncertainty. Will all the hard work pay off? Will it be a bumper crop, or a yield too low to pay the bills? Mother nature alone can wipe out an entire season with a single storm.

While the work is steady on the farm, the results are agonizingly unpredictable. Technology has streamlined the tilling, sowing and fertilizing, but even the most skilled farmer can’t out-engineer nature. Still, there is hope, and it’s coming from a group of Northland Community & Technical College graduates armed with a specialized skill set: map reading.

If there is such a thing as an “average map reader,” these Northland grads aren’t it. After two years of training in the Geospatial Intelligence Analysis program — now offered online, as well as on-campus — they walk out as superhero map readers. They don’t just know how to read maps (any map, that is)… they build maps. Maps that can save a farmer’s field from an invasive weed infestation, periodic flooding or even drought.

How can one map do all that? The same way one map can help rescue a group of hostages fighting for their freedom halfway around the world.

‘One Map to Rule Them All’ 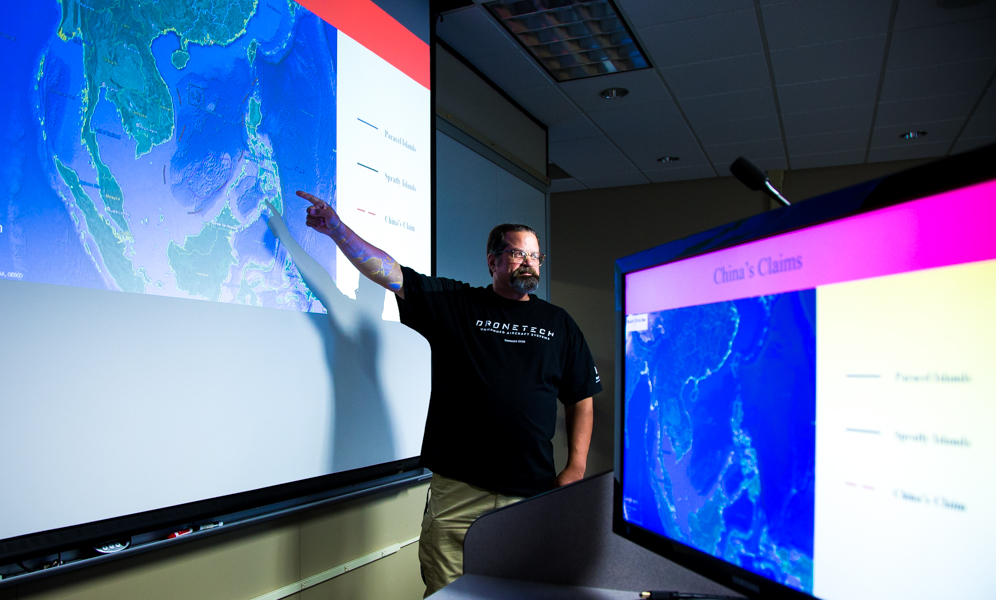 “One map to rule them all,” Steve Sorenson said with a sneaky chuckle. A 27-year Army intelligence veteran, Sorenson is one of Northland’s two highly-experienced Geospatial Intelligence Analysis (GeoInt) instructors. In his coded remark, he captured the gamer-geek spirit of this unique aerospace program. “Most will miss that reference,” he admits. “But the ones that get it… those are our students.”

If it was a Hollywood blockbuster, GeoInt would be a genre of its own, combining the best elements of fantasy, mystery, and drama. As Sorenson explained, a good map tells a brilliantly complete story, tickling your brain with an irresistible mystery that gets solved in Sherlock Holmes-esque style.

As an industry, GeoInt defies categorization because it has so many applications. In basic terms, geospatial intelligence analysis is the practice of interpreting an image of planet Earth and identifying objects and structures in order to make actionable recommendations. That definition, however, fails to communicate the enormous value such a skill brings to real-world situations. Whether it’s high-stakes military intelligence or a struggling Minnesota sugar beet operation, the art of GeoInt is a far more powerful tool than its unassuming names would lead you to believe.

From Marketing to Hostage Rescues 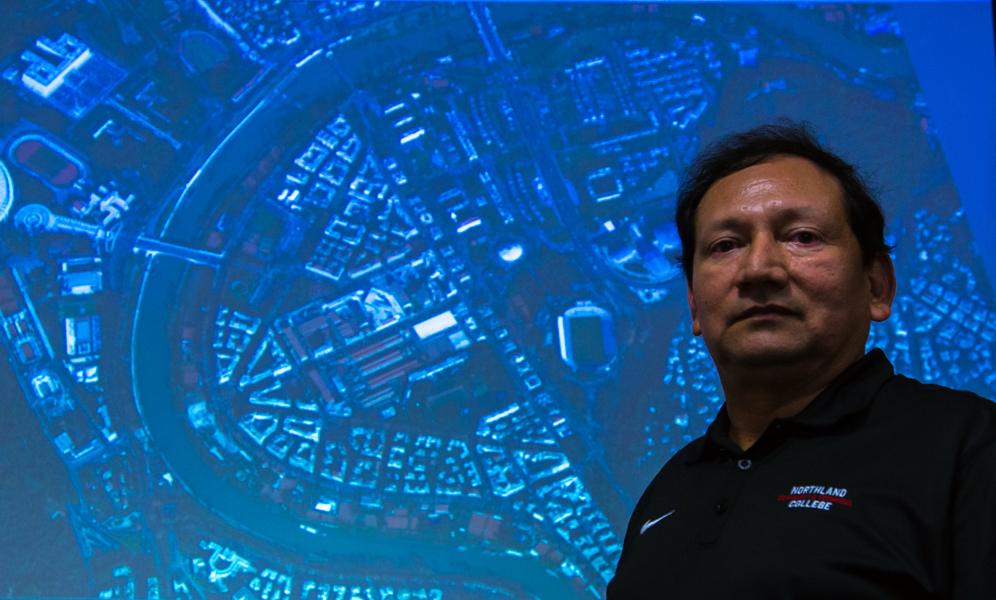 The key word in that explanation is anything. The reason why GeoInt is so hard to explain is because anything is possible given a few data points to play with.

“For example,” Sorenson said, “Target could hire you to determine if the company needs to build a new store or simply relocate an existing store to a better spot. You’d use data like purchase history and where people live to build a visual map that shows where Target’s best opportunities are to boost profits.”

Frank Nix, a 16-year imagery analyst for the Department of Defense (DoD), likes to give his online students a few more intense scenarios to work through. Nix teaches the online courses and often transforms his digital classroom into mock situation rooms, where students get a chance to put their skills to the test under simulated real-world pressure.

It’s a job with a serious impact. … it can be a race to the finish where real lives are at stake, adding an extra shot of adrenaline to the challenge of solving these real-world problems.

“I do a scenario with a hostage situation in Afghanistan,” Nix explained, his tone lowering as he began to relay the serious details of this fake kidnapping. “A group of American contractors has been taken by what we believe to be Taliban forces and hidden somewhere near this mountain village. It’s the student’s job to analyze the satellite imagery, identify all the features of the land, locate the hideout and then plan the best escape route [based on the geography] for our American forces who will be sent in on the rescue mission.”

It sounds like a fantasy board game, but it’s not. For the enlisted military men and women who come through this program, these are the situations they will face in the field. The scenarios in the farm field are no less meaningful. Lives or livelihoods, both are often on the line… and it’s the imagery analyst who gets to make the recommendation on how to solve the problem.

As Sorenson said, “We’re training people to think critically, look at the information in front of them and ask them to predict what’s going to happen next. It’s a job with a serious impact. And in some cases, it can be a race to the finish where real lives are at stake, adding an extra shot of adrenaline to the challenge of solving these real-world problems.” 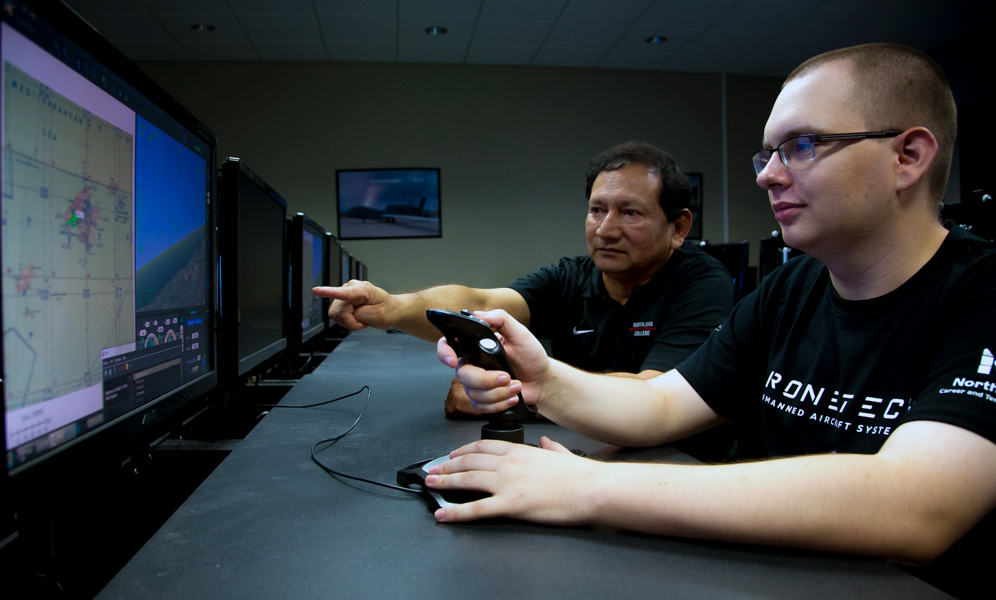 It’s the fundamental question that underpins everything a geospatial imagery analyst does and trains for. It’s the motivation, the carrot dangling off the end of the stick. It’s deceptively simple, but the “So what?” is everything in this game.

So… what? What is it? It’s the solution to the problem. The big reveal. The completed puzzle. At the end of every report completed by Northland’s Geospatial Intelligence Analysis students, there’s a “So what?” section where all the analyzed data gets put into action—actionable intelligence.

Fighter pilots—natural born thrillseekers—train for dogfights. That’s where they get the adrenaline rush they crave. Geospatial analysts—thrillseekers of a more subtle breed—get their rush from the challenge of answering the “So what?” question when no one else can. They train for the opportunity to deliver actionable intelligence that can save a life, a corporation or a farmer’s field.

Who makes a good GeoInt analyst? The gamers, coders and problem solvers who want to change the world one clue, one puzzle piece at a time.

Drones, Farming and the Future… All at Northland 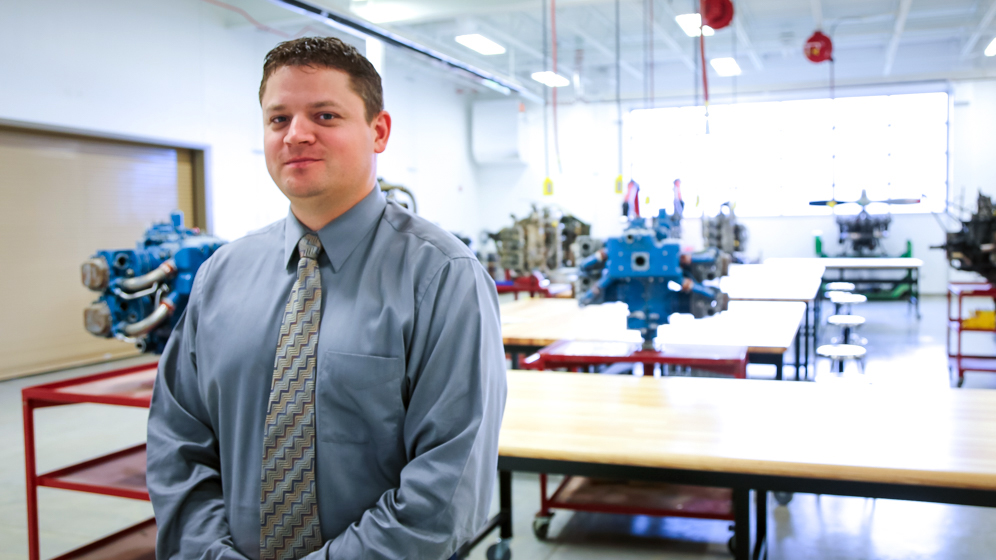 “There is no other program like this,” Curtis Zoller said both proudly and matter-of-factly. Another military man, Zoller heads up the Aerospace and Agriculture department at Northland. “If you want to get this level of GeoInt training in a formal setting, you have to join the military. We’re the only civilian program… and our program is even more robust, more wide-ranging compared to that military training.”

And he should know. In addition to his duties as Academic Dean, Zoller still trains imagery analysts as part of his continuing service in the Minnesota National Guard. As he sees it, Northland is in a unique position—literally—to meet the incredible demand of a booming industry like no other institution in the country.

Companies like Northrop Grumman and Boeing come and recruit our students right out of class.

“It’s such an emerging field,” he said. “The big need is with unmanned aerial systems (UAS, a.k.a. drones) imagery analysis, and we’re on the front end of it that here at Northland, both with GeoInt program and our UAS service and technician programs. A student could come here and learn it all and make him or herself absolutely indispensable in this field… and do it all right here on our campus.”

With all the aviation technology, high-def cameras, and high-tech imaging tools now available to every sector of the economy, it’s no longer just the military that needs people trained to analyze this flood of information. Zoller says we’ve only just scratched the surface in terms of potential for geospatial intelligence analysis as a career.

“We haven’t even seen the tip of the iceberg in regards to the need for people like our grads who can decipher that information being gathered by all this new technology,” Zoller said. “This is a niche market that people getting in now are on the ground floor… and there’s just no way it will ever go away. From DoD to agriculture, whatever the student wants to do after graduation they will be able to do because the need for people who know how to understand and decipher all this information and turn it around is so great.” 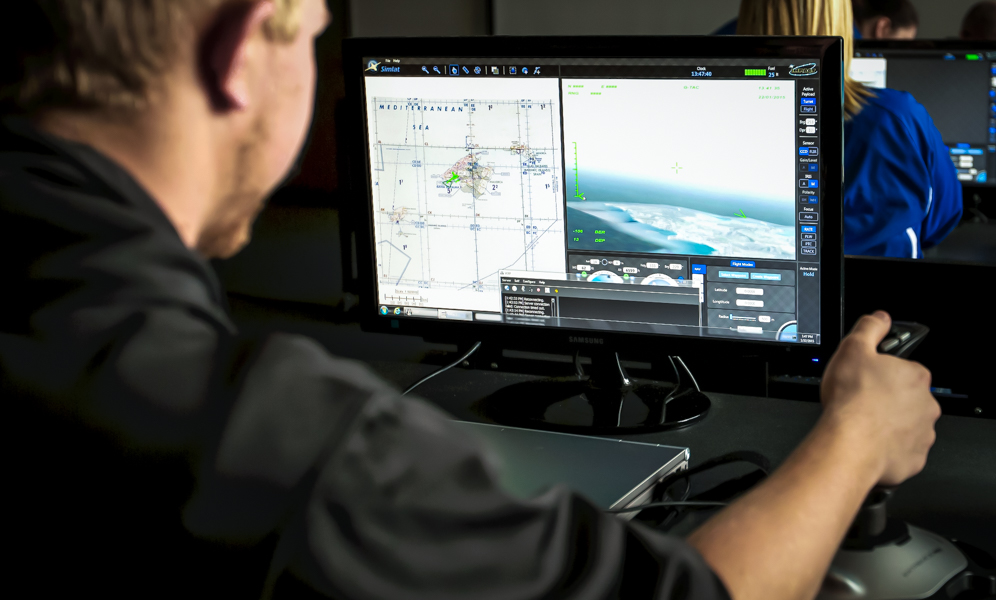 Nearly 80 percent of companies across all industries rely on some sort of geospatial data. Corporations, farmers and municipalities rely on geospatial data for things like mapping new retail locations, planning new communities or forecasting crop yields. In economic terms, GeoInt delivers a trillion dollar impact to the world economy.

With drone technology advancing into more and more industries, the aerospace department at Northland in 2018 decided the time was right to take its Geospatial Intelligence Analysis program online to help meet the growing demand. The inclusion of a distance learning option will allow Sorenson, Nix and the rest of the aerospace instructors to train students around the world for diverse careers in both the public and private sectors, ranging from military intelligence to retail marketing.

Providing this training in an online format serves the needs of today’s students.

“Northland aerospace education and aviation maintenance are well regarded in the industry,” Zoller said. “Companies like Northrop Grumman and Boeing come and recruit our students right out of class. We basically have a 100% job placement rate. Our instructors are in constant coordination with these industry leaders to make sure our education is at the cutting edge. Providing this training in an online format serves the needs of today’s students, as well as the industries that hire our grads.”