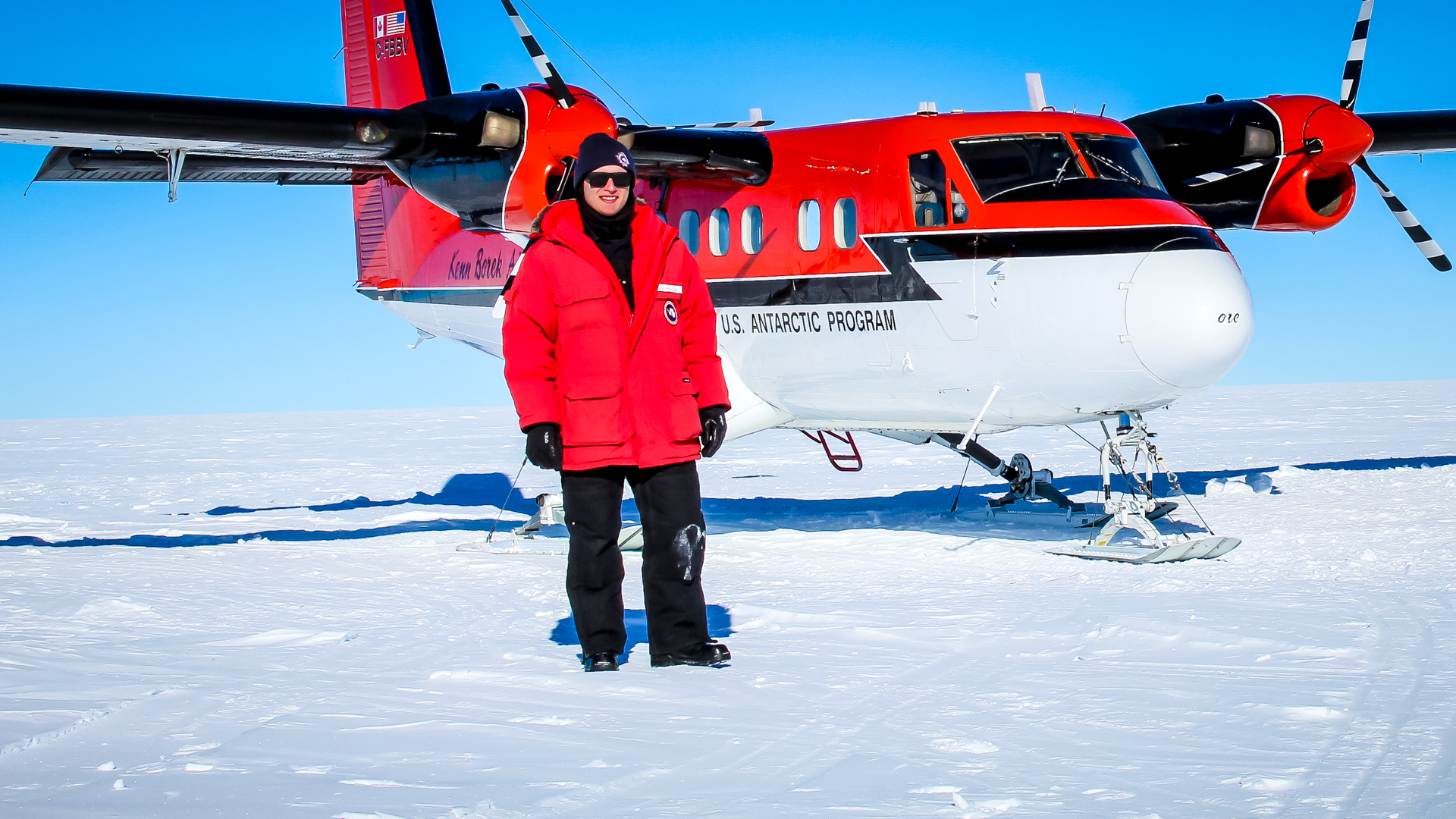 From Northland to the South Pole

It took seven weeks of back-and-forth email exchanges to arrange one phone call with Coltyn Blotske, a 2014 graduate of Northland Community and Technical College’s Fire Technology and Advanced Rescue programs. Then, on the day of the much-anticipated call… silence. Eleven o’clock Central Time came and went without a ring.

When you’re waiting for a call from the South Pole, however, you have to suspend your reality a bit like you do at the movie theater watching a sci-fi film. Would it sound like the South Pole? Would there be static on the line? Would your fingers feel an empathetic chill while holding the phone? You just don’t know.

An hour after the missed call, Coltyn fired off an email:

NASA had to use our satellite this morning, so I had no service this morning before work. Now I am at work and have no time to talk.

NASA. Amazing. A kid from Underwood, ND, with a two-year degree, is now living and working at the South Pole, competing for satellite usage with the world’s preeminent aerospace organization… who needed it “for space station stuff.”

“I love what I do,” Coltyn said. “I go to work smiling and leave work smiling. Of course, there are hard days and people you don’t like to work with, but you’re doing what you love. There’s nothing like it. Two years ago if you told me I’d be working in Antarctica, I’d laugh in your face. But here I am, and I absolutely don’t regret it.” 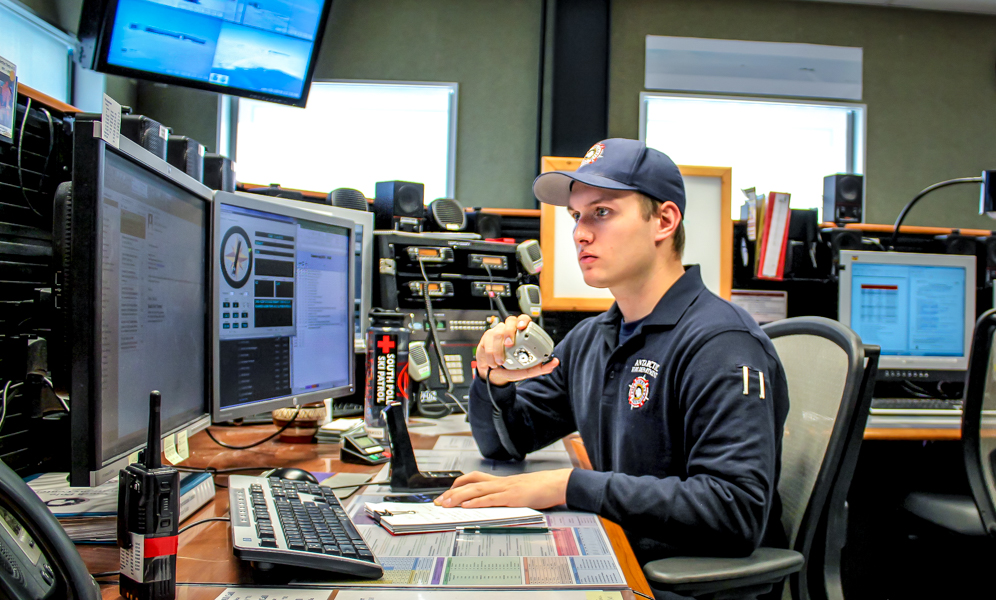 Years before Coltyn found himself working as a firefighter in the toughest conditions you could possibly find on planet Earth, he was already well on his way to this dream job. He was fortunate enough to have discovered his passion early in life before college was even on his radar.

I kept hearing that Northland is the place to go if you want to go to fire school. So I went to take a tour … I immediately felt like this is the right place to go. The rumors were true.

As a young volunteer going through the state of North Dakota’s fire school, Coltyn developed a network of friends and fellow firefighters who were on a similar path. That group is where he first heard about the outstanding reputation Northland’s fire technology programs had earned throughout the region. Many of his fellow volunteers were enrolling, so he decided to go for a visit and see for himself what opportunities might be available.

“I kept hearing that Northland is the place to go if you want to go to fire school,” Coltyn said with the same enthusiasm he had leading up to that first campus visit. “So I went to take a tour with a buddy who was already going there and I immediately felt like this is the right place to go. The rumors were true.”

During his two years at Northland, Coltyn fell even deeper in love with the job. And like so many other reports from graduates of Northland — from auto body technicians to occupational therapy assistants — he couldn’t say enough about how well prepared he felt leaving the classroom going into his first day on the job as a firefighter in Minot, ND.

It’s not a quick program just to get you through. … You show up to class like you’re going to work and they send you out to simulated real-world situations.

“All of the instructors at Northland are over the top amazing,” Coltyn assured, “but what struck me as most impressive was the hands-on equipment and technology we used in the classroom to train on. It’s not like 20-year-old equipment like you might expect… it was all that I ended up using on the job in Minot. I walked right in and was familiar with everything. That confidence is priceless, especially in this job where someone’s life may be on the line.” 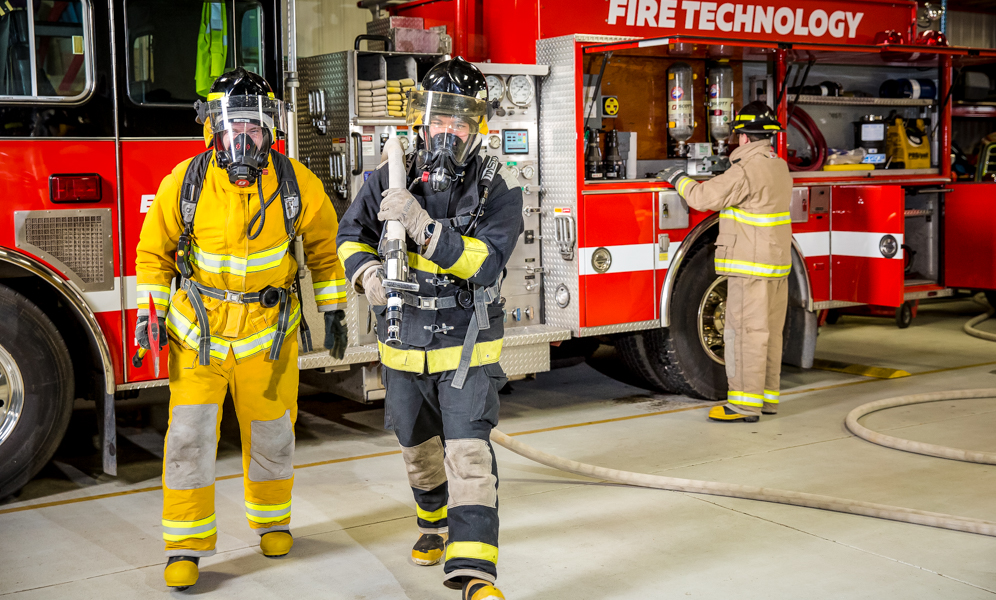 The role of a community college like Northland is to prepare workers for meaningful, technical jobs so much of today’s society relies upon. Coltyn discovered there really is no substitute for such a realistic, albeit demanding training environment. As he described it, he was given the opportunity to train in real time, in real-world situations.

“It’s not a quick program just to get you through,” Coltyn said with a slight laugh that hinted at the excitement and challenge of Northland’s fire school. “This is the whole kit and caboodle, and you walk out as a certified Level I and II firefighter in Minnesota. So you learn everything. You show up to class like you’re going to work and they send you out to simulated real-world situations.”

As good as Northland’s training proved to be, no simulation could prepare Coltyn for the toughest work environment on planet Earth. Actively looking for a new challenge, he submitted applications around the region and landed a spot on several hiring lists. Nothing piqued his interest until a friend mentioned the idea of international contract work, and first on the presumably alphabetical list was Antarctica.

“I was looking for a department with a paramedic service integrated into it so I could fulfill my desire to become a Firefighter/Paramedic,” Coltyn explained, “but then I talked with a friend who told me about the world of contract firefighting. I researched the Antarctic contract and was super interested in being able to travel the world and see different cultures. So, I decided to be a contractor for a few years and pad my savings account while seeing the world.”

Firefighters are some of our most selfless public servants. They don’t go on strike. They don’t take a day off. When called to an emergency, they are the first to the scene with lifesaving skills in tow. No conditions are ideal to fight fires, but none worse, perhaps, than the most frigid desert on earth. Temperatures in some parts of Antarctica have dipped below -130 Fahrenheit. Add any amount of wind, and you might as well be working in the deep freeze vacuum of space.

“I thought Grand Forks was cold,” Coltyn admitted, “but today it’s -60 wind chill. The storms here are relentless… they’ll roll in out of nowhere and just destroy the town. We have three different conditions: 3 you can still see; 2 is bad (if you venture outside of ‘town’ you have to check in and make a plan); and 1, where you absolutely are not allowed to leave whatever building you’re in… the visibility is so bad, the wind is so strong, you have to stay put.” 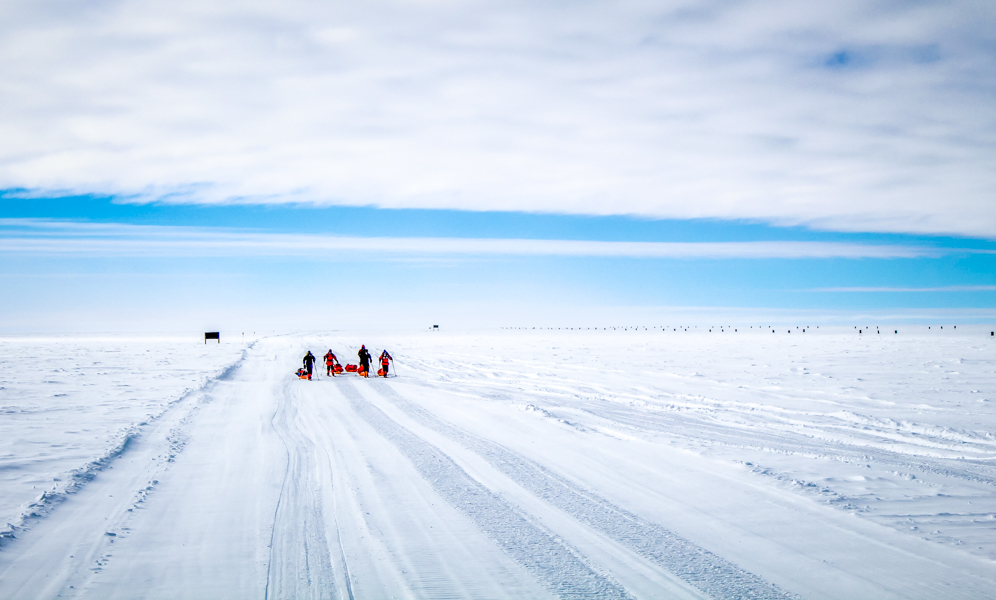 So what about fighting fires? Well, that’s only part of Coltyn’s job description while living at either McMurdo Station or at the actual south pole (Amundson Scott South Pole Station, to be precise). Like any firefighting position, a majority of the job isn’t responding to fires, but rather medical emergencies. About 80 percent of the calls into any fire station around the country are medical related, be it a car accident or a heart attack.

Coltyn’s main job is training those around him, including the on-base fire brigade. While maintaining his own skills in fire rescue and emergency medicine, he helps the whole station gain the knowledge they need to help out whenever an emergency may arise. Aside from that, he’s a contributing member of a very small, very elite community most of us will never know. 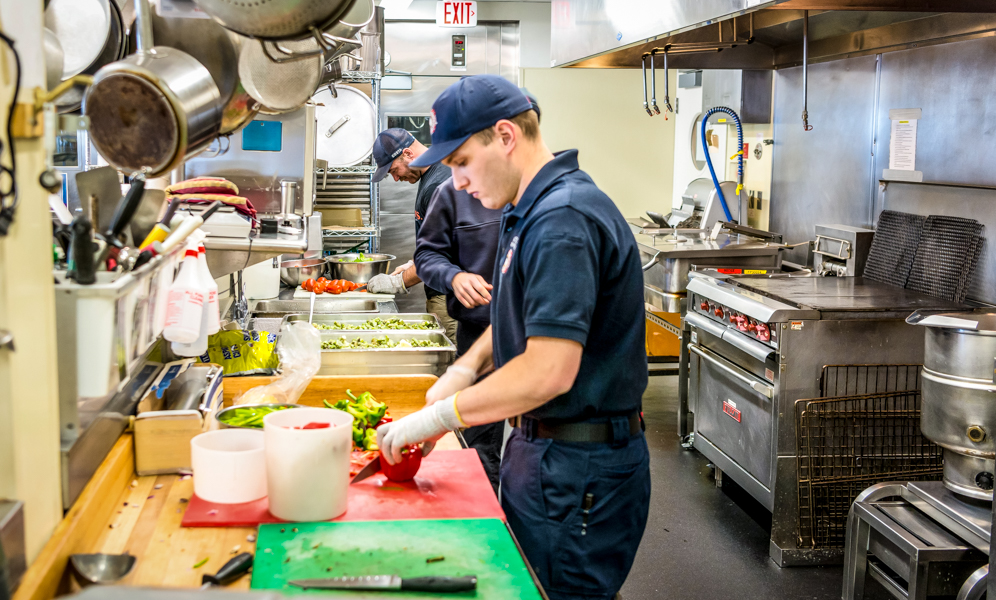 “Growing up where I did back home in North Dakota, everybody helps out,” Coltyn said, ‘but here that’s taken to a whole other level. You have to work together to get anything accomplished, so everyone pitches in with daily duties like taking out the trash, doing the dishes, cleaning the station, even helping incoming aircraft navigate their way onto the ice.”

When asked about the perks of remote living, Coltyn pauses. After a few moments of silence — in addition to the seven-second delay from halfway around the globe — you can feel the appreciation in the answer he delivers.

“I absolutely love it down here,” Coltyn starts out… “When I started down here it was 24 hours of darkness. I never saw the mountains just across the bay from me. Then, gradually, the sun slowly started to come out, revealing the most amazing pink and purple mountains you’ll ever see. Just beautiful.” 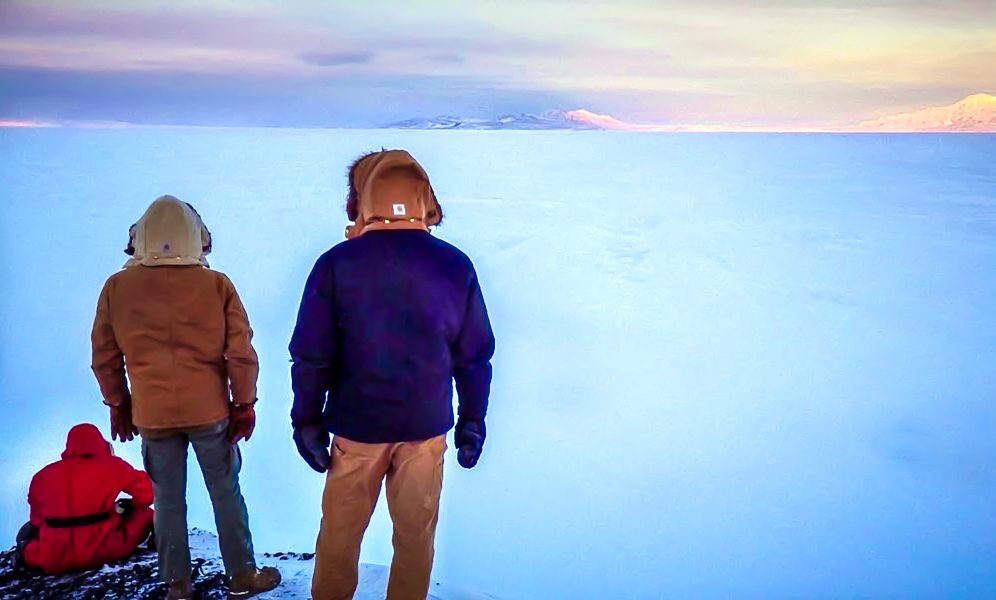 Would You Do It Again?

With plans to do at least one more tour in Antarctica, the answer is clear. Coltyn is doing what he loves in a place few will ever get to see or experience. It’s a long way from Northland Community and Technical College and his hometown of Underwood, ND, but his roots are what brought him to the end of the earth.

“I can’t say I’d do anything differently,” Coltyn said without hesitation. “Everything’s been great. Northland set me up perfectly. I loved my job with the Minot fire station and would like to land back there at some point, but the move here was very easy. I can’t change anything, nor would I want to. I plan on doing at least one more contract down here and after that, the world is open with opportunities… the Middle East, Africa, Europe, there’s really no limit to where I can go. With the training and experience I now have on my resume, the future is pretty bright.”

I can’t say I’d do anything differently. Everything’s been great. Northland set me up perfectly.