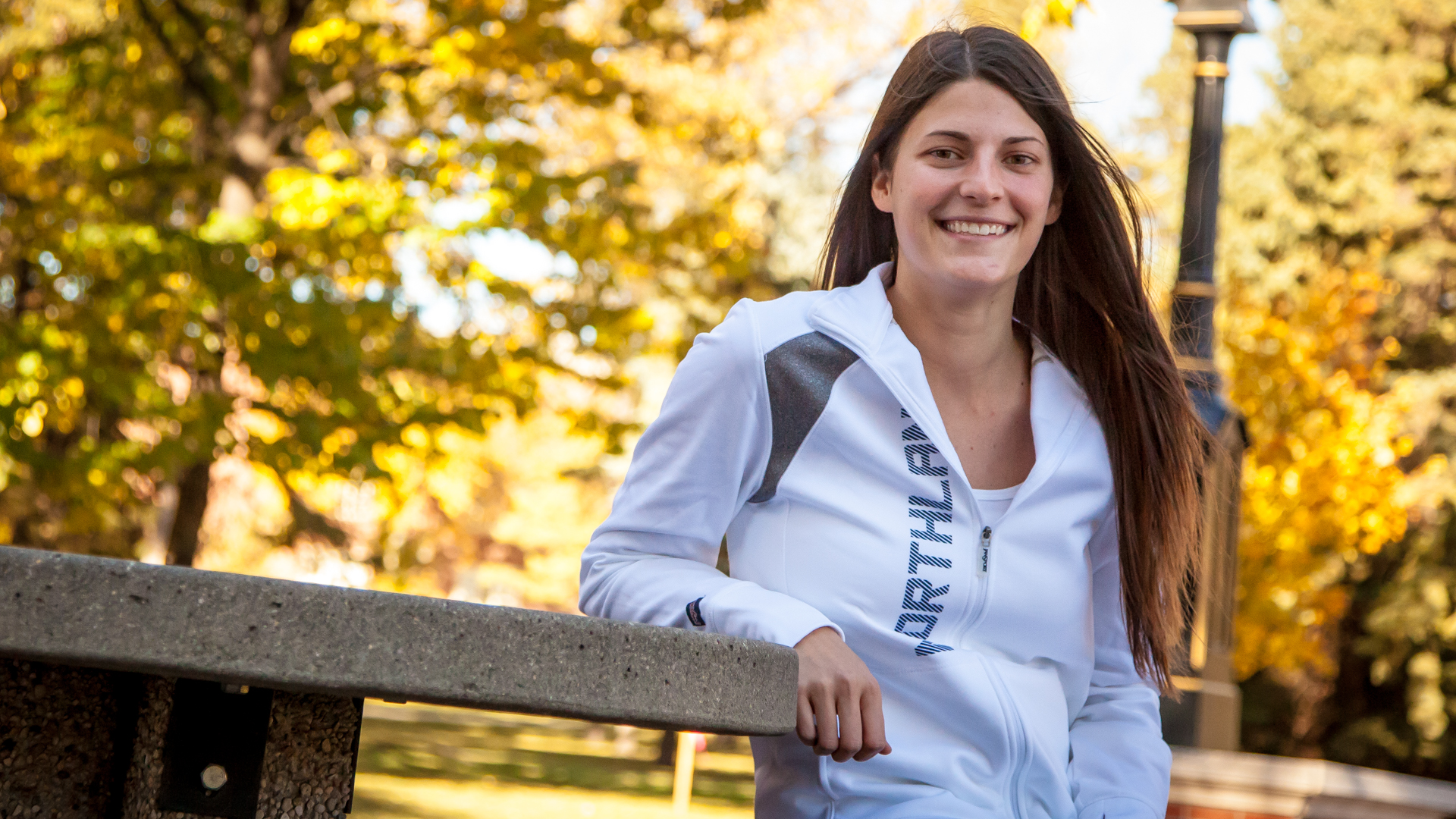 Small Town Star Shines On Court And In Class

Growing up in Middle River, Minn., with a mere 303 residents, Eiley Berg received a lot of playing time at Greenbush Middle River High School. She was a two-sport star who excelled both on the court and in the classroom. Though her achievements didn’t come without effort—she put in the work, and then some, her natural abilities simplified any challenge.

High school is never easy. But for Eiley, it was definitely more painless than complicated. She was in command whether it was a game day or test day, and the competition never flustered her. But it was just high school. Near the end of her senior year, Eiley would come face-to-face with that reality… and with it, a challenge that would finally rattle her to her core.

As her high school career wound down and the prospect of an uncertain future loomed ahead, Eiley found herself entirely outside her comfort zone for the first time in her life. Now, the proverbial shot clock was ticking and everybody wanted to know: What was Eiley going to do next?

I wasn’t ready to give up sports … I also had no clue what I wanted to do.

In the back of her mind, she always knew she wanted to attend the University of North Dakota, but she had no idea what she wanted to study. She also wasn’t ready to throw in the towel on her athletic career… but UND is a Division 1 athletic program. As talented as she was, Eiley knew D1 athletics were beyond her reach. For a few stressful months, it seemed she would have to pick one over the other—either athletics or academics—and neither option felt right.

Then she discovered Northland Community and Technical College, which offered Eiley a third option that combined the best of both her passions.

ACADEMICS AND ATHLETICS: YOU CAN HAVE BOTH AT NORTHLAND

Eiley was a standout for a small school, but her passion for competition would’ve fit right in with any top-tier program. That desire to keep playing drove Eiley to explore options beyond the traditional four-year path, one that many graduating seniors end up choosing more or less by default. But mostly, she wanted to keep playing.

“I wasn’t ready to give up sports,” Eiley confessed with the kind of confidant acceptance in her voice that only comes with the luxury of hindsight. “I also had no clue what I wanted to do.”

When Northland came across her radar, her interest was immediately piqued and she reached out to the admissions office to explore her options. That’s when she discovered Northland’s Liberal Arts program, a two-year associate’s degree program with built-in flexibility.

Little did she know at the time, but Northland had developed the 60-credit Liberal Arts program specifically for students like Eiley, students who have four-year educational goals but aren’t ready to give up sports. At Northland, Eiley would be able to pursue her athletic ambitions while exploring her academic (and career) options. It was exactly the opportunity she needed. Northland was the perfect fit… and UND would still be waiting.

Eiley had once again found her comfort zone. Not only would she earn two years of general credits required for her future bachelor’s degree, but she’d also return to competition and make a significant impact on Northland Pioneers athletics… specifically, on the basketball court.

As a coach, you always try to recruit student athletes who will bring value to the college as more than just an athlete. Eiley did exactly that.

“Eiley was exactly the type of student-athlete that most coaches dream of having,” said Shannon Nelson, Head Women’s Basketball Coach at Northland. “She was hardworking and dedicated both on the court and in the classroom. As a coach, you always try to recruit student-athletes who will bring value to the college as more than just an athlete. Eiley did exactly that.”

TWO-YEAR PATH TO A FOUR-YEAR DEGREE

“A lot of people don’t know we have this type of program,” admitted Mary Fontes, Dean of Student Affairs at Northland. “The Liberal Arts program is one of our best-kept secrets, but the word needs to get out so students like Eiley Berg know they can get started on their college education while they figure out what their four-year degree goals may be.”

But Fontes says Northland’s two-year programs offer more than just academic flexibility and freedom. The community and technical college also give students a way to save money while they map out their future. The credits that easily transfer, the small class sizes, the individual attention Northland instructors and coaches are able to give to their students and athletes… these benefits combine to create an environment where students are free to thrive at their own pace and at the right level.

The Liberal Arts program is one of our best kept secrets.

Had Eiley chosen to enroll at the university straight out of high school, she would’ve felt pressured to declare a major long before she was ready. Like so many young college students, she needed time to explore her interests and find her career calling. Yet, the predominant message high school seniors hear from parents, guidance counselors and even friends is one of undue urgency. Sure, some 18-year-olds may know exactly what they want to do for the rest of their lives. But many more do not. The problem is these students often do not get the reassurance they need that it’s okay to take some time to make this major life decision.

Northland designed a program that would solve this problem. The college recognized that students like Eiley needed an option that was flexible, yet purposeful. Eiley knew she wanted to earn her bachelor’s degree. She knew she wanted to attend UND and never lost sight of that ultimate goal. But she also didn’t want to get forced into picking a major before she was ready.

What Eiley needed to hear was the voice of reason. At 18, she needed someone to tell her that it’s okay not to have your whole life planned out and that she needn’t bid farewell to athletic competition… not just yet. When she heard that message at Northland, Eiley finally felt free to define her own path to success.

“It all worked out surprisingly well,” Eiley said smiling as she looked back on all the good fortune that came from that one decision to explore Northland.

“Everything….like me not knowing what I wanted to do until March of the year I graduated [from Northland], that I could play volleyball and basketball for another two years, that I didn’t have to take extra classes when I got to UND, that I was accepted into grad school on my first try… From the moment I decided to go to Northland, everything felt right.”

Now, five years (and three national championship appearances) later, Eiley has an A.A., a B.S. and is one semester away from earning her master’s degree in speech-language pathology from UND. But it all started at Northland with a purposefully flexible two-year Liberal Arts program that gave her the freedom to choose how her higher-ed career would unfold.

From the moment I decided to go to Northland, everything felt right.