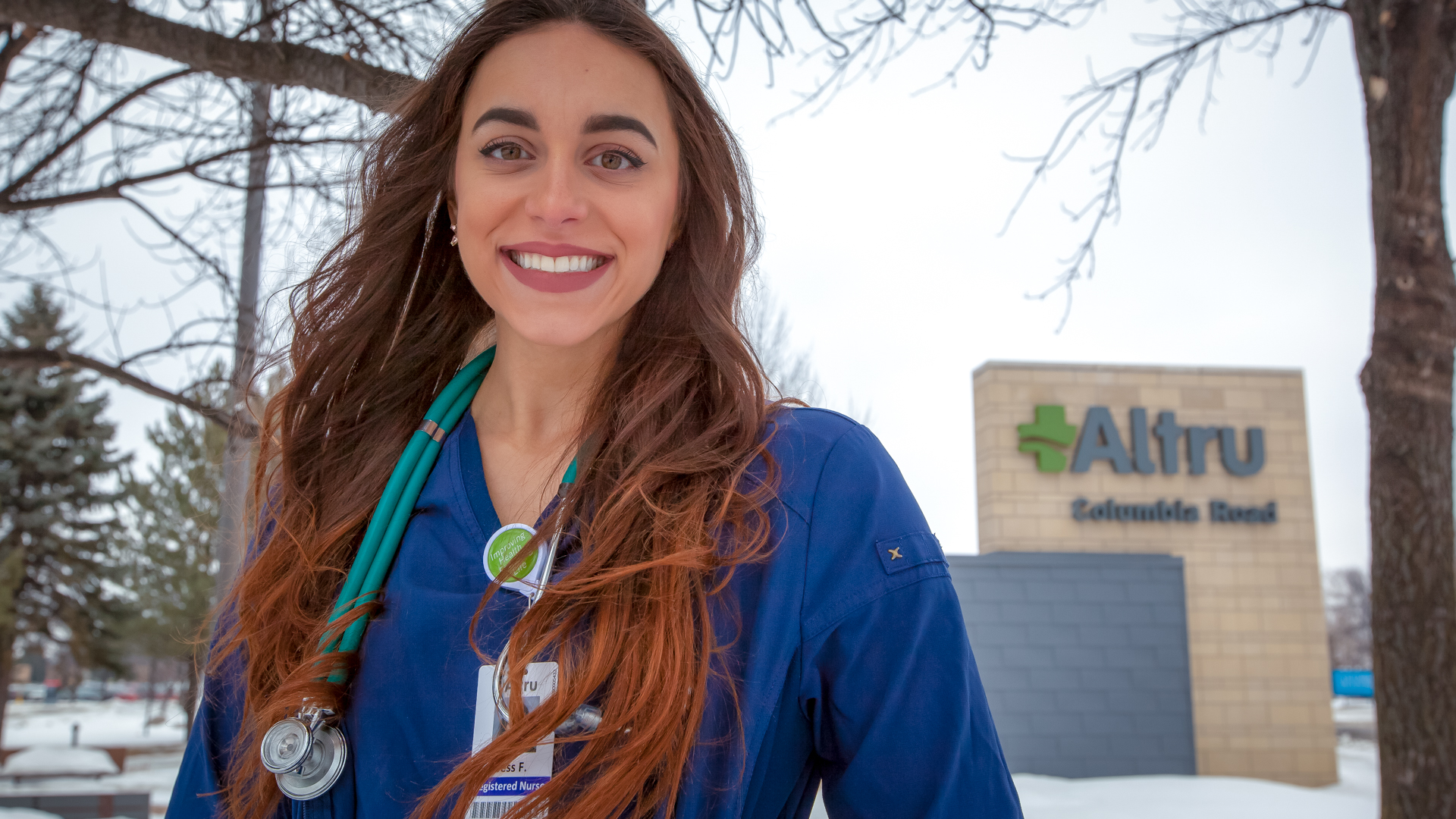 It was never much of a mystery where Jessica Fontes was going to go to college. Or at least, there was no question as to where she would start. Northland Community and Technical College was in her blood. Her father attended Northland. So did her brother. Her mom has worked for the college since before Jessica was even born.

In many ways, Jessica grew up on campus as she tagged along with her mom to work and explored the hallways and classrooms that she would one day call her own. So the question wasn’t about where she was going. That was crystal clear. The real question—several questions, really—was much more personal… and the answer was all but clear.

As a self-identified introvert with a strong shy streak, Jessica was understandably nervous about taking that next step in her life. How would she react to being away from home, even if “away” was only an hour from your front step? Would she be able to make new friends? Or even muster the courage to ask a question in class?

A star on the volleyball and basketball courts, Jessica also wasn’t ready to turn in her sneakers. Rightly so, she knew sports would be the one thing that would force her out of her shell. But would it be the same as high school? Could she keep up? What if she didn’t like her coaches? What if she didn’t even make the team?

Finally, like most 18-year-olds, Jessica had no clue what she wanted to do with the rest of her life. So did it even make sense to go to college at that point? Would it be a waste of time? A waste of money?

Serious questions with no clear answers. The only sure thing was Northland, but what would Jessica find when she got there?

The Shell Begins to Crack 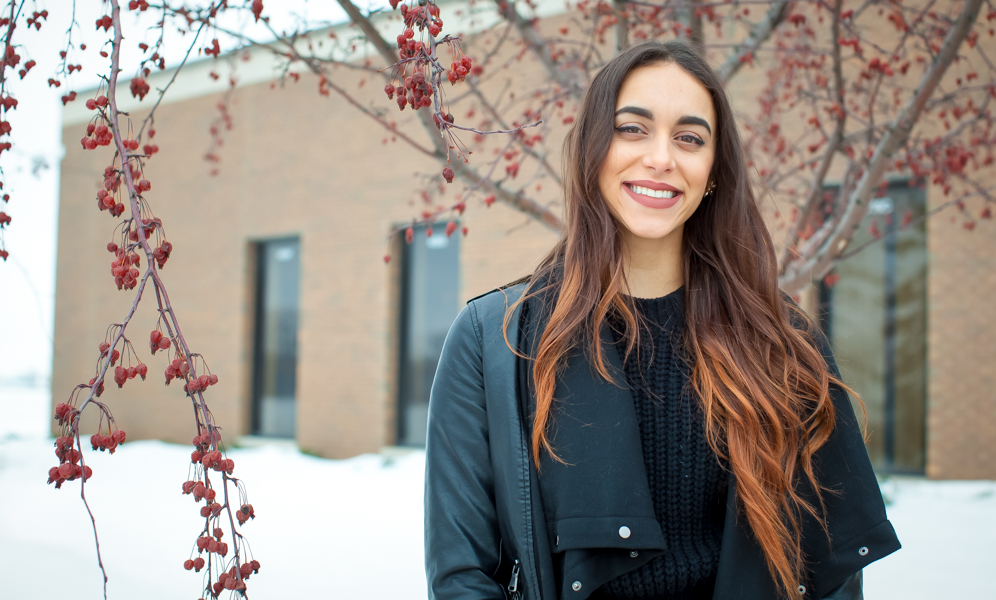 When Jessica set foot onto campus, she was already one step ahead of most of her classmates because of her close family connection to the school. She knew much of the faculty and administrators, and they knew her. But that was the extent of her familiarity with her new life as a college student.

Despite all of her built-in knowledge of the space, Jessica was still a stranger to her new classmates and teammates. She would have to put in some serious work opening up to forge the necessary relationships with her peers. To her relief, she discovered early on she would have lots of help in tackling that challenge.

I’ve never seen another school like Northland that understands students as a whole human being, a whole living story.

“One of the things that makes Northland very special,” explained Jason Pangiarella, Student Success Coordinator at the Thief River Falls campus, “is not only do faculty really try to have a one-on-one, first name relationship with students, but we also try to treat our students as a whole person. I’ve never seen another school like Northland that understands students as a whole human being, a whole living story. Jessica was super involved in athletics, super dedicated to grades, she brought a full plate with her… so our challenge was to help her find her voice and be comfortable in her own voice.” 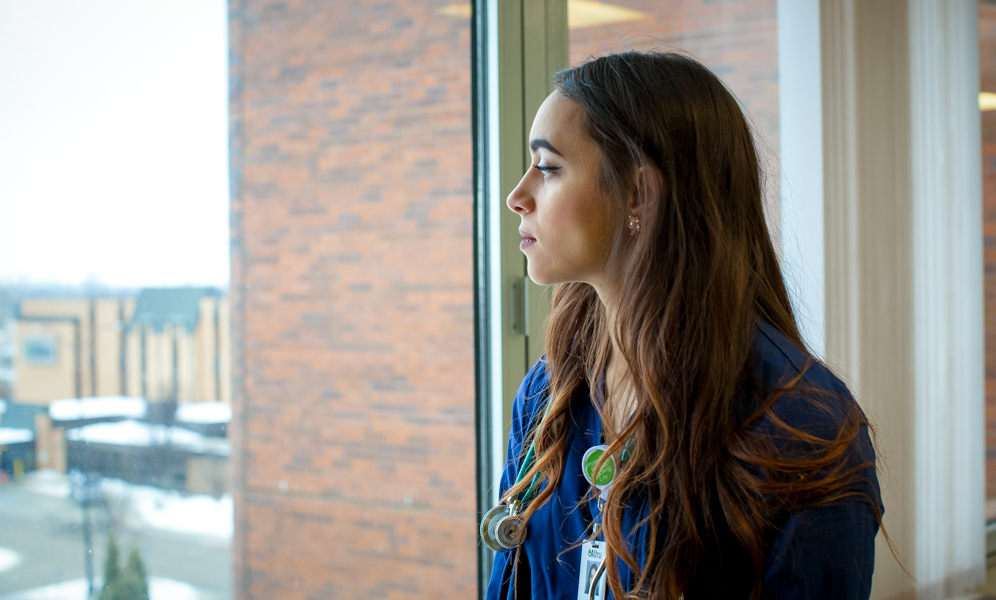 One of Jessica’s first classes at Northland was a public speaking course required by the Liberal Arts & Transfer Program she was enrolled in. Right away, she was forced out of her comfort zone and straight into the spotlight at the front of the class. Thanks to Northland’s small, supportive atmosphere, Jessica not only survived a class that had the makings of an introvert’s worst nightmare, she actually looks back on the experience with a thankful heart.

I was a very shy person so it made it easier for me to communicate with others. You got to know people in your classes really well… it made my later transition to UND a lot easier.

“I was in public speaking at Northland, and I actually loved it simply because of the small classes,” Jessica said. “I was a very shy person so it made it easier for me to communicate with others. You got to know people in your classes really well… it made my later transition to UND a lot easier.”

As she spoke, you could see the clarity start to form in her mind as she recalled just how big a role Northland’s close-knit, supportive culture played in her success.

“You meet lifelong friends at Northland,” Jessica said. “Everyone is super easy to talk to. If I had a question on something, somebody would always help. Teachers were five steps away and always willing to answer questions. When you go to a big university, you have to try harder to get to know others… maybe even harder to fit in. Not at Northland. All in all, what made my experience the best were the people I was surrounded by.” 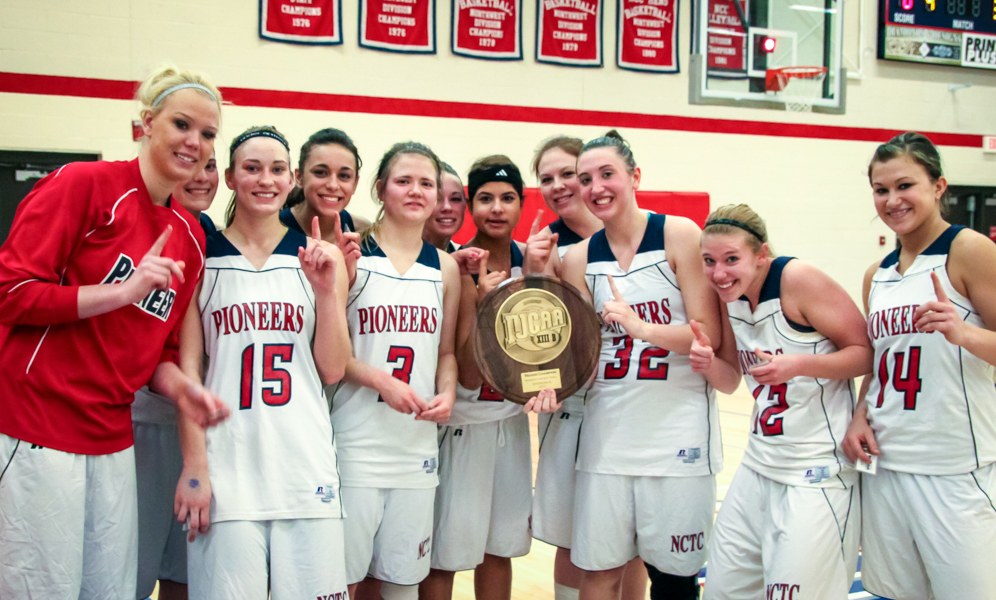 Of all the friends and mentors she found at Northland, Jessica’s teammates and coaches may have left the biggest mark on her life. Athletics was a major deciding factor in her choosing the two-year community college route. “I didn’t want to give up sports,” Jessica said with a competitive tone that hinted she still may not be ready to hang it up. “What drew me to Northland was the fact that I could play.”

Aside from the playing time, Jessica knew that participating in Northland athletics would offer the fringe benefits that come with being a part of a team. In a way, her choice to spend two years at Northland playing basketball and volleyball was a sneaky power play against her own introverted instinct to go unnoticed.

“When you come to Northland as an athlete,” explained Shannon Nelson, Northland’s Head Women’s Basketball Coach, “you have a group of friends already set for you with your teammates. You’re not all alone… you’ve got that built-in support system. Jessica was definitely someone who really thrived thanks to that built-in network.” 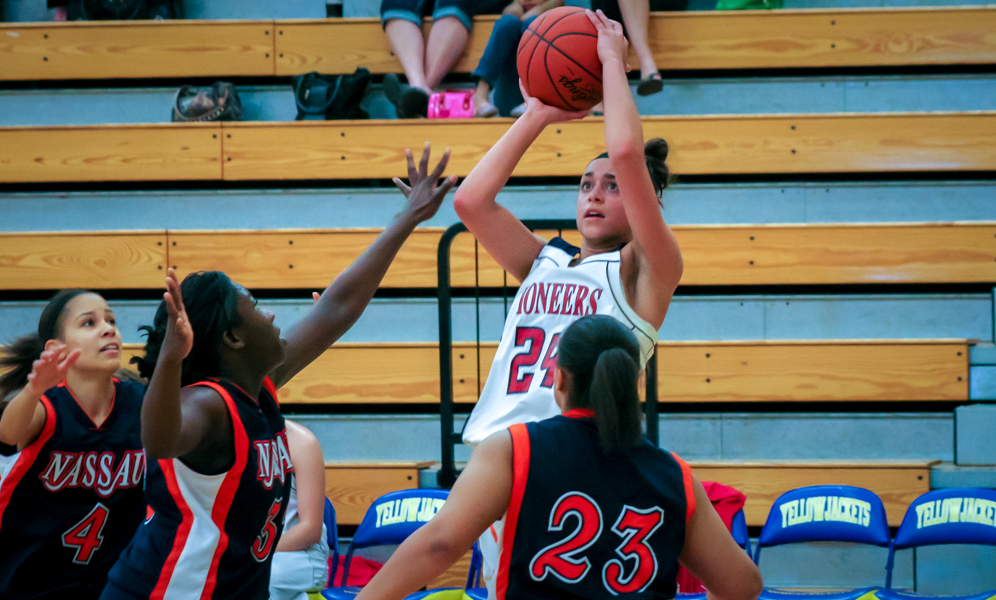 And thrived she did, racking up a pile of awards for the Pioneers. With NCAA tournament appearances, All-American honors, Dean’s List awards, etc., Jessica didn’t go unnoticed for long. “By the time I got to her,” Coach Nelson said, “she wasn’t shy at all. She had a magnetic personality that teammates flocked to.”

You’re not all alone… you’ve got that built-in support system. Jessica was definitely someone who really thrived thanks to that built-in network.

When pressed, Jessica agrees with her old coach that breaking out of her shell went a lot quicker than she had anticipated. And easier. When asked why she doesn’t hesitate to give credit to Northland.

“I think everyone gets nervous when they think of college athletics,” Jessica said. “You think you’re a hotshot in high school, and it’s a bit daunting taking the step up. But at Northland, I wasn’t nervous at all once I got here.”

Sporting a Pioneers jersey not only helped Jessica open up, make friends and uncover what Pangiarella called “a core of iron under a heart of gold,” it also paved the way towards realizing a lifelong dream… and earning a four-year degree. Discovering a passion along the way was the icing on the cake.

A Dream Come True (And a Career, Too) 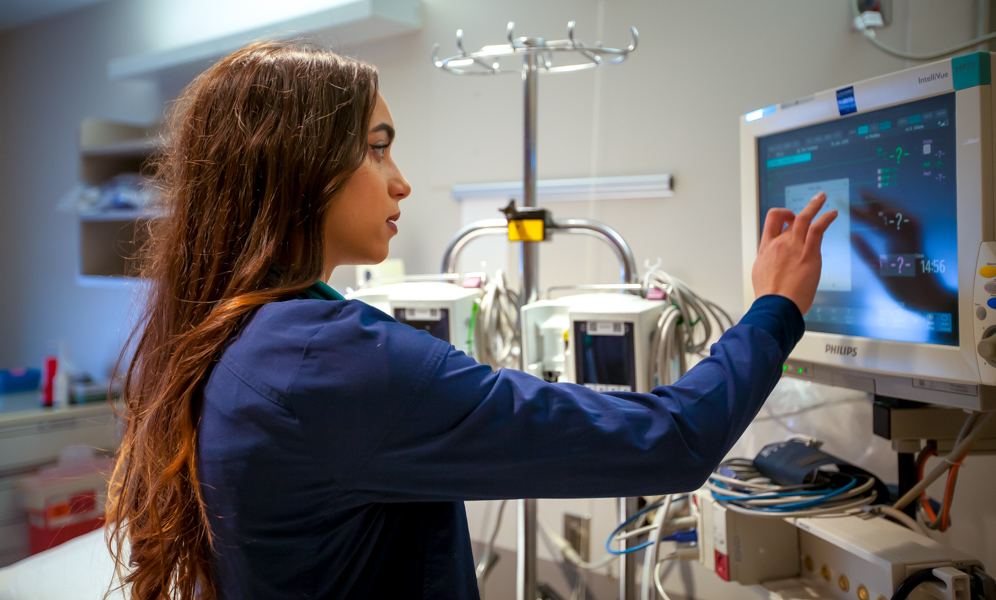 “I knew, in the long run, I wanted to play at UND, but right out of high school wasn’t the right time. I also knew Northland was a much more affordable option and a good way to help me make up my mind about careers while still making progress with my college courses. The Liberal Arts program gave me the basic classes I would need no matter where I went or what I ended up doing.”

I knew, in the long run, I wanted to play at UND, but right out of high school wasn’t the right time.

As a standout on the volleyball court, Jessica attracted the attention of coaches at the University of North Dakota. With her long list of athletic achievements, she seemed destined to move up to Division-I. Her plan was working to perfection, both athletically and academically. Her lifelong goal to play for UND was about to come true, and her two years at Northland gave her the time to discover a passion for nursing.

“In my second year at Northland, I decided I wanted to do something in the medical field, so my advisor and I looked at classes that would transfer to UND. In 2012, I graduated with my associate’s degree in liberal arts, transferred to UND—got accepted into the nursing program on my first try, one of the hardest programs to get into—and went on to play D-I volleyball for three years.”

Reviewing her collegiate career, you could make a strong argument that Jessica was the ideal student-athlete, taking full advantage of every benefit and opportunity available to her. A dual-athlete who capitalized on her success and led the Pioneers to the national stage. A shy kid who found her voice with the support and encouragement of caring teammates and dedicated faculty. A committed student who utilized a flexible two-year Liberal Arts program to find her career calling.

Watching her grow into her voice and claim her voice was very powerful. It was something she came to Northland to do and we needed her to do it as a student leader.

“It took her a little while to understand that she was a natural leader,” Pangiarella said, “and that she could have an impact on others. Watching her grow into her voice and claim her voice was very powerful. It was something she came to Northland to do and we needed her to do it as a student leader. I told her when she graduated, ‘Jessica if I could clone you and put that spark in every student, I would be out of a job… but it’d be worth it.’” 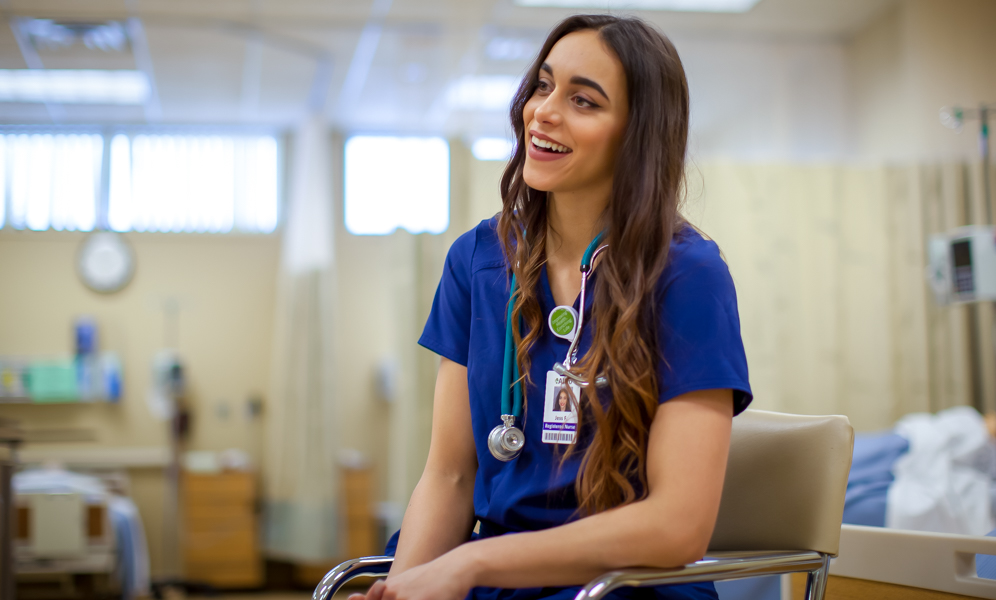 In 2016, Jessica graduated from the UND school of nursing with a BS degree. Within a year, the critical care unit at Altru Hospital — where she had completed her final practicum — offered Jessica her dream job as an ICU nurse. It’s a high-level, high-impact position not normally offered to someone without an extensive resume. But Jessica was looking for a challenge, and thanks to her practicum experience, was already trained in on the equipment and routines of the unit, giving her an edge on the competition.

“I love it,” Jessica said, clearly tired after getting off a 12-hour night shift. “Some days can be pretty stressful, but I wanted something that was more intense in terms of critical thinking and having to figure out what you’re going to do next to help these critically ill patients. I definitely owe this job, in large, part to my practicum experience.”

Right now I have it pretty good… I got the degree I wanted. I got the job I wanted. It would’ve never happened had I not started at Northland.

And that practicum was the culmination of every little step Jessica took along the way — the final piece of a puzzle that could only fall into place after a lot of hard work and determination. Today, she is continuing the trend of personal and professional success that began on the campus of Northland Community and Technical College.

Asked if she would change anything if she had the chance to go back and start over, Jessica didn’t hesitate. “I wouldn’t change a thing,” she said. “Right now I have it pretty good… I got the degree I wanted. I got the job I wanted. It would’ve never happened had I not started at Northland. My whole story would be different had I gone somewhere else.” 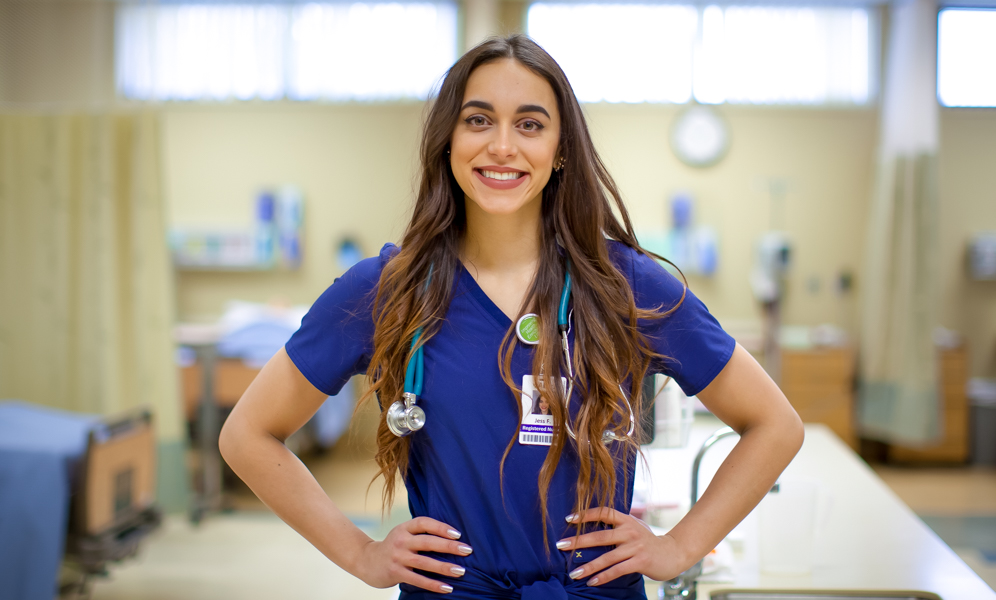